skip to main | skip to sidebar

Well, I finally got a laptop a very needed laptop!!! My parent's bought it for me for my 32nd brithday. I am finally able to update my blog, play games on facebook, and do my homework without my computer freezing up. YAY!!!!
I am on school break until the 25th ( I think)... and the kids will be going to school this year around the 25th also. I realized that doing homeschool while in college fulltime is almost impossible although plans may change depending on how this school year goes for the kids.
My parent's are here visiting me, they were going to leave last Monday but have decided to stay an extra week because I was too sad that they were leaving me here ALONE in this HORRIBLE place! Hopefully, I will feel better by the time they leave this Sunday. 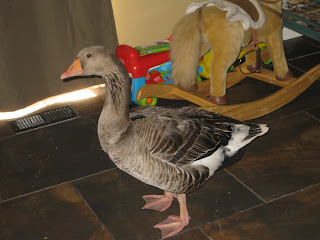 Gracie has been laying eggs finally. While we were out of town she was laying about 1 egg a day but now she has slowed down to about 1 or 2 a week. I wasn't able to upload a pic of the eggs because of this computer but will post some soon. I have been having major computer problems so that is why there hasn't been much activity lately.
Here is an updated pic of Gracie.
Posted by LuvlyKnits at 8:48 AM 1 comment:

We all got the Swine Flu shot

Me and the kids all got Swine Flu shots this morning. We havn't had any bad side effects yet and haven't grown any tails. I think we are ok. I was pretty nervous getting the shot because of all the crazy stuff I was hearing but I figured that I would rather get the shot than get the flu with pneumonia later. I was becoming an agoraphobic and I was affraid to leave the house and catch the flu. Hopefully we don't have any thing crazy happen later! Tara got her shot before us and she is still alive too. :)
Posted by LuvlyKnits at 2:49 PM No comments: 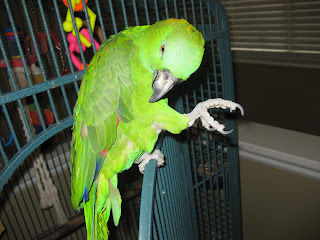 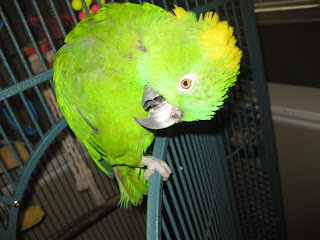 I have been teaching Oliver how to sing. He doesn't have one of those beautiful parrot voices. He sounds more like an old man who smoked a little too much but he has been trying.
He has actually started to dance with me and try to sing along. It has taken over 3 years to get him to finally start opening up.
We have been working on some new words too. He won't say them yet in front of me but I did catch him practicing his new words while I was in a different room. I wonder when he will think he is good enough to say them in front of me...
Posted by LuvlyKnits at 10:21 PM No comments:

I finally found my two foster ferrets a good home. I miss them though. :(
My kids got a little attached too.
We are adjusting to life again without them and are able to focus more on our sugar gliders.
Posted by LuvlyKnits at 10:18 PM No comments: 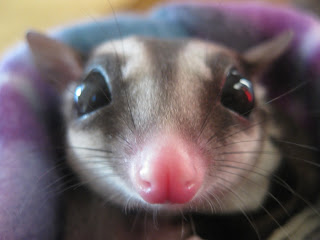 After carrying her around with me almost all day long. Pretty has finally stopped trying to kill me. Isn't she CUTE!!!
Posted by LuvlyKnits at 7:08 PM 1 comment: 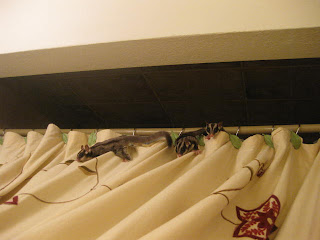 The whole family playing in the shower curtain. 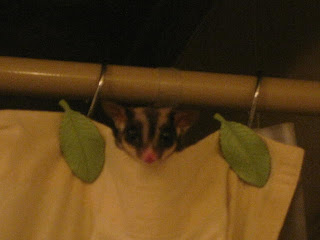 Hanging out in the shower curtain. 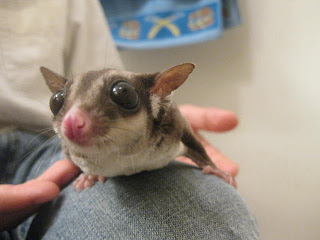 Up close and personal pic. LOL

These are way cool. They actually aren't Vampire Bats but that is what we have nicknamed them since they have bitten hard enough to draw blood. These are actually my new COOL pets they are Sugar Gliders. They are so AWESOME!!! The only problem with them is that they don't feel too comfortable with us yet so they have been a bit "nippy".
I have the a mother who is 5 years old and her two baby girls, who are 2 years old.
Their names are Pretty, Cutie, and Butterfly. I am not sure what one the mother is. I can't even tell them apart. I painted the front nails on one of them, the back nails on the other, and no nails on the last one.
My older son is scared to death of them and has been having nightmares of them ever since one jumped out of the cage and into his shirt. We couldn't get it out of his shirt because it was growling at us and trying to attack. About two hours later we coaxed it back into it's cage by at meal worm treat. Now my son is traumatized and doesn't want to go near them. LOL
Posted by LuvlyKnits at 4:47 PM 2 comments:

Our lady of Mount Carmel pray for us! 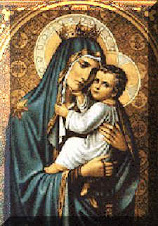 Remember, O most gracious Virgin Mary, that never was it known that anyone who fled to thy protection, implored thy help, or sought thine intercession was left unaided. Inspired by this confidence, I fly unto thee, O Virgin of virgins, my mother; to thee do I come, before thee I stand, sinful and sorrowful. O Mother of the Word Incarnate, despise not my petitions, but in thy mercy hear and answer me. Amen

Visit my shop on Etsy